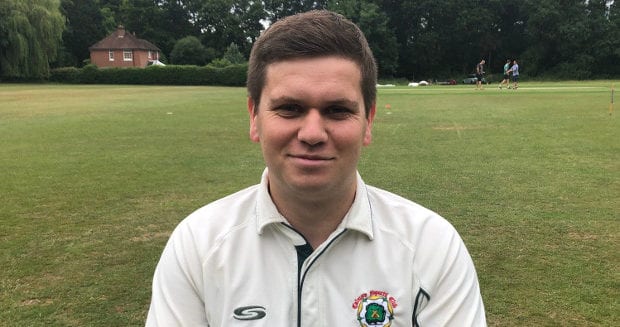 Today is May 26th as we continue, whilst cricket remains on the back burner, to look back over the events and matches played “On This Day” in Calmore Sports history and, as mentioned yesterday, we will start with “part two” of a double over the same opponents!

But rather than me running through the bare facts of the game in SPCL Division One in 2018 at Romsey Sports Centre, I have enlisted some help.  I am going to leave all of this to the captain and his opening bowler … and opening bowling partner, Steve Wright.  Over to you, Gents.

ML – It was a tough wicket that took a lot of spin.  Me and Matt Hardy teed off a bit up top knowing that we needed to get as many as we could off the seam!
SW – Having been 46-0 through Hardy and Lav, I thought 180-200 was on.
ML – We got off to a bit of a flier but lost wickets regularly.
SW – 108 all out with still 12 overs left!  You can imagine Lav’s choice of words at the interval.
ML – We knew we had to bowl well to even be in the game and were looking to be fuelled by a good tea … cut in half, stone cold Rustler’s burgers wasn’t quite what we had in mind, and sadly these were also the main event!
SW – Despite only scoring 108, we still backed ourselves to win or at the very least make it close.
ML – After asking a squash player to get out of our changing room, me and Wrighty took the new ball and took a couple of early ones.  We juggled the bowlers around as they looked like chasing it down quite easily!  Johnser came on and burgled a wicket to keep us in it.
SW – I opened the bowling with Lav and we were tight, we had them 42-3.  Stu Tognarelli came in and, having played a few seasons with him at Sparsholt, I knew we could get him.  I said to Lav, I’ll go at deep mid on (and as you know OTs straight is fairly long!), chuck them up and he will try and hit you straight.  He took him on and I took the catch at mid on which kicked started the collapse.
ML – At 80/4 we were pretty much down and out.  Last throw of the dice, I brought myself on and took a couple of cheap ones alongside Westy and all of a sudden they were 88/8.
SW – Westy bowled his heart out for 1-14 off 10 and Lav with a quality 5-18 off 10.
ML – Game on!!  It got down to them needing 4 to win with two wickets left and we were out of it again!  They tried a quick single to Matt Hardy at cover, no one backing up.  Hardy is not famed for his throwing ability, time to shake hands, to all of our disbelief, he pulled off an epic direct hit and guess what, game on!  Then came the moment.
SW – Nine down with 2 to win and Troddy on 10 not out.  Lav threw me the ball and I bowled three dots balls to Troddy.  On the fourth, he tried to hit me over mid on only for the ball to go about 50ft in the air.
ML – Troddy tried to put Wrighty into Broadlands.
SW – It was a horrible moment, but I could win it.  I shouted as loud as I could, I was still waiting, the ball was still in the air, every possible thought was going through my head, including the 4.40 at Kempton.  To my relief, I caught it to win the game by 1 run!
ML – Wrighty wheeled off like Alan Shearer, followed by incredible scenes and a huge bundle!
SW – I ran around Romsey Sports Centre with onlookers from the skatepark like it was the members pavilion at Lord’s with my Alan Shearer celebration.
ML – We had somehow managed to win a game which for 90% of it, we were easily second best.  Time for a beer and to finish off the leftovers from tea.
SW – What a day!!!!

Back at Loperwood and the 2s sent Langley Manor 2s packing with an 11-run victory in County 3 South in a spicy little encounter.  Put into bat, we put together 191-4 in our 45 overs as Adam Carty struck an unbeaten 69 and Michael Donovan a 21-ball 38, putting on a very quick 63 for the fifth wicket at the end of the innings.  The visitors slipped from 54-0 to 71-4 – including a first-baller from former Calmore captain Rob Budd’s son Will – but they recovered to take the game close.  Paul Henry’s 2-21, Ben Perry with 2-45 and Allan Hurst’s 3-37 did the bulk of the work but it was Dave Blake removing their number 9 Terris was ensured the win was secured on his way to 2-8.

Meanwhile, the 3s headed down to Boscombe, in the shadow of AFC Bournemouth’s ground and hit the back of the net with a 26-run win.  Mark Hardy hit 52 at the top of the order before Glen Kinchington (36*) and Tom Houlder (27*) lifted the total to 188-5.  If it hadn’t been for the 37 wides thrown down by our bowlers, the margin of victory would have been much wider!  Sam Vidler took 3-55, Houlder 2-23 and Adam Hargreaves 3-31 to seal the win (and I had fresh air!!)

In 2007, we faced a difficult game with Portchester in County One at Cams Hill School but safely navigated to a 37-run victory.  Gordon Pritchard hit 47 before Nigel Hill with 21 and Paul Bowring hitting 16 at number 11 lifted us from a precarious 137-8 to 184 all out.  Hill’s 3-41 took the honours at the start of the innings before the spin duo of James Rose (3-28) and Mark Boston (4-31) did the rest – helped by three stumpings from the quick hands of PB!

The SPCL Division One game at Liphook and Ripsley in 2001 saw us lose by six wickets, thanks to a brilliant opening stand by the hosts!  Our total of 225-9 was built around Glen Motchall’s 52 and skipper Paul Draper with 47.  Hopes would have been high for a good win with a decent score on the board but it wasn’t to be once Steve Riley hit a superb 116 along with Chris Wright’s 67 taking the game away although they did only win with 15 balls to spare.

In our first ever Southern League season of 1990, it was a trip to New Milton today and many would have backed Steve Brandes’ side to win when the home side slid to 113-7 chasing down our 181-8, which was built around Gary Stinson Calmore SL best of 69 with eight fours before Kevin Emery’s unbeaten 28 and Chris Garrett 22 drove the score up.  Garrett’s 3-28 removed the top three and Brandes 3-56 took the middle order out before Neil Taylor’s unbeaten 74 coupled with John Whiting with 27 saved the hosts.

Our last game today comes in 1983 and the first round of the Romsey Advertiser Knock-Out at home to Millbrook and Maybush.  For those unfamiliar with this competition, it was a 16-over per side game but with eight ball overs rather than six.

The visitors batted first but only had 10 players which didn’t help their cause as they were bowled out for just 25 as Richard Rogers – better known as Oscar – returned the remarkable figures of 4-2-2-6 – two maidens in eight ball overs is quite something but taking 6-2 is just ridiculous!  Baz Oram’s 11 not out top scored as we lost three wickets chasing it down as J. Tull took 2-10 …. familiar name?