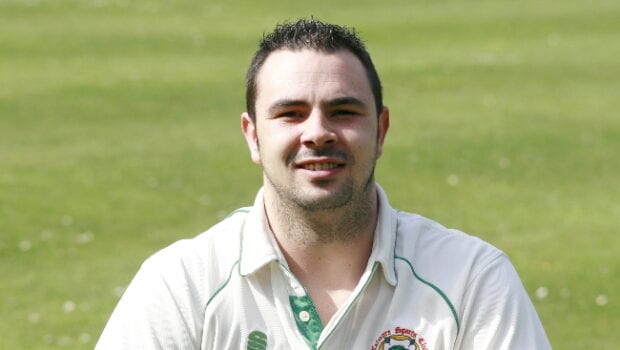 CALMORE ON THIS DAY – June 30th

Hello Tuesday!  The end of the second month of the cricket season, the end of June.  Some good days, some not so great but our ground is looking in a prime state – absolutely magnificent and well done to all involved.  There is just one thing missing … a game or two.  It was due to be Border League Cup and Plate Quarter-Final night this evening.  Oh, for a beer outside the pavilion watching!  Or playing, of course, much more important.  Instead, we continue our look back on events that took place on 30th June over the years.

It’s a tough one to start with today but credit where credit is due – the innings by Bournemouth’s Luke Webb was quite outstanding.  It’s the SPCL Division 1 game away at Bournemouth in 2018 and our title defence wasn’t progressing particularly well so a trip to Chapel Gate was never going to be an easy one and so it proved as we would endure a 135-run defeat at the hands of the Dorset captain and a handful of his county teammates.  Dominic Ducellier did get a wicket early removing Tom West for 2.  And Steve Wright bowled his 10 overs with six maidens for 0 for 15.  However, Nick Park had been joined by Webb and they built a 125-run stand to ease any nerves.  Park went for 54 – run out by Wright – but Webb continued on his merry way to a near run-a-ball chanceless, unbeaten 138, the highest individual score we had conceded in three seasons.  Their total of 246-4 in their 50 overs could have been a lot more but the bowlers did have some element of control, Mark Lavelle’s 1-47 and Ben Perry 1-51 showing that.  In realism, we were never in the reply as Ben Johns top scored with 24 with Jimmy Manning behind him on 16 as we were blown away for just 111 inside 36 overs as Robert Pack took 4-22, Dominic Clutterbuck 2-27 and Jake Hurley 2-8 at the end.

The 2s needed a quick bounce back after their disappointing first loss of the season last week and they got it with a three-wicket win over Emsworth which was our seventh win from eight starts and we were firmly in the shake up for promotion.  The margin of victory was only three wickets but the game was never really in any doubt.  It certainly wasn’t once Storm Anning had taken 2-22 and Dave Blake 2-54 in reducing the east Hampshire side to 89-7 although they did recover to 142 all out as Adam Carty claimed 2-40 and Paul Henry a miserly 3-9 from 6.2 overs.  The veterans stepped up with the bat as Carty (43) and Tom Pegler (36) scored the bulk of the runs as we got home with plenty of time to spare despite being seven wickets down.

After blowing away Fair Oak the previous week, confidence had grown in the camp when the 1s headed to Hursley Park in SPCL Division 3 in 2012 after our indifferent start to the season.  And we would make it two wins on the spin – but only just!  Hursley won the toss and put us in and they would approve of their decision when we dropped to 76-4.  It needed a partnership and we got one, a 70-run stand between Pierre Kriel, who made 69 and a first XI debutant Tom Perry, who stayed with the South African in making 16 off 64 balls.  Both fell in quick succession and we scrabbled to 171 all out, Andy Marks taking 3-25 for the hosts.  As he mentioned last week, Paul Proudley bowled exceptionally and finished with figures of 2-15 – he bowled considerably better this week than he did last when he took seven wickets!  But he removed Marks for 0, which took him 20 ball to compile which let Mike West remove the middle order but Gary Storey was standing firm with 63 before he became James Rose’s second scalp (2-46) as they fell to 130-8.  Matthew Oliver hit 27 down the order which took the home side close but when Paul Henry had him caught by Mark Archer, they were just seven runs shy of victory.  It would be Henry’s last 1st XI game for five years – and he didn’t set foot on the ground in that game!

Ben Perry had a great all-round game for the 2s at home to Locks Heath 2s, captaining the side, taking 4-36 with the ball and hitting 44 in the reply but we would be well beaten by 31 runs, which didn’t back up Luke Johnson’s 3-24 and Mark Gardner’s 2-37 and 25 with the bat.

It was a trip to Alderholt 2s for Adam Hargreaves’ 3s in Regional 3 South-West and their impressive record would continue with a narrow 14-run win which sealed a sixth win in seven.  Glen Kinchington’s undefeated 49 lead the way and with productive contributions from Paul Bowring (37), Matt Taylor (28) and Dean Lavelle (25) allowed us to reach 163-6.  A sensational spell of bowling from Martin Donovan tore the top order apart as he took 5-24 – all of the top five to reduce them to 40-5 – but while Ranger was still in, the home side were still in the hunt.  An inspired choice of bowler was required.  Marc Gilmore was that man as he removed the danger man for 77 and wrapped up the innings with 2-16.

It was due to be a Border League night tonight – the weather might have put paid to that – but we can look back on another Tuesday night in 2009 at the unique ground which is sadly no longer there, Swan Green.  And it was a night that Mark Archer put any vehicles that was passing on the A35 in danger as he would club a sublime unbeaten 105 in our total of 162-3 across 18 overs.  Mark Lavelle chipped in with 20 and James Rose 12 but the Swan bowlers had little answer to ‘Frank’ that night.  The home side would be bowled out for 105 as Paul Proudley took 3-19, Mark Gardner 2-18 and Lavelle 2-11.  Luke Johnson also took two wickets but his 11 balls went for 27!  It was a strange old ground.

Here is yet another of those ‘let off the hook’ moments in Calmore history as we head back to 2001 and another Time Game at Southern Gardens but this was a day that Glenn Motchall will remember for a long time.  When BAT Sports were reduced to 68-7, Tom Pegler’s side were dreaming of a quick finish and a big win.  The hosts had other ideas with former Romsey batsman Adam Hayes holding one end up with 42 not out while Dave Adams (35) and Dan Goldstraw (25) set about our predominently two pronged attack of Motchall and Hibberd – Mark Boston and Paul Draper bowled just three overs between them out of the 48.1 bowled.  Hibberd took 2-66 in his 21 overs but it was the Melburnian taking a then club record 8-87 from 24.1 overs that was the true standout (since broken by Mark Lavelle).  BAT had recovered to 171 all out which was still firmly on the radar if we started well.  We didn’t!  We were 46-5 in no time as Goldstraw continued his hold over us with 4-44 as only a pair of 37s from Paul Cass and Mark Archer raised the optimism but we were removed for just 136.  Time games, eh!

Our first season in the Southern League in 1990 was a whole new experience but one side we would play today had our number – they had won the last seven league encounters and they would won this one too by 61 runs.  That side is Hursley Park who opened with future Calmore captain Martin Kellaway, who kept wicket and Hampshire wicket-keeper Adrian Aymes, who didn’t keep wicket!  Martin made 18 but their total of 142-7 was thanks to Mark Fletcher’s 42 and Chris Mitchell’s unbeaten 44 as Kevin Emery took 3-38 and Chris Garrett 2-21.  We had little in the way of response against Enfield (4-22) as we were removed for just 81, Dave Fox whipping out the tail with 3-2.

There was a New Forest 2 game for the 3s in 1984 against Pennington and they would pull off a victory which looked like it would be comfortable but turned out to be a nerve jangler.  Down at the Old Ground, we would bat first and make 164-8 with Tony Norris making 38, Colin Stuttard 28 and Kenny Barrett 22.  Pennington would collapse to 34-5 against a brilliant spell from Tony O’Connor (5-25) and Steve Thomas (2-49).  Even at 83-7, there was no sign of the concern that would bring the game as close as it did.  Rowley with 38, Veal with 24 and Webb’s 17 not out brought them to within eight when the overs ran out – Geoff Graham taking 1-65 in 14 overs at the end!

Four days ago on the Thursday night, we booked our place in the Final of the Hector Young Trophy of 1969 with a thrilling two run win over Trojans.  The following Monday would be the showpiece at Hoglands Park against Old Tauntonians.  OT’s batted first and would make 93-6 in their 22 overs with Trevor Jerrim carrying his bat through the innings for 43 while Ivor Wallace made 10 and former Hampshire player Derek Tulk 11 as we used the traditional two bowlers throughout – Michael Newman 2-42 and Keith Bell 4-42 in their respective 11 overs.  Our reply was going well at 78-4 and Vic Sevier (24) alongside Tony Archer (13) going nicely.  Binks (5-33) and Bryant (3-50) had other ideas and it would come down to the last over.  Mike Glogg went, Chick Chandler went and the last pair of Newman and Bell were unable to get the two runs needed off the last ball, only getting a single, leaving the match tied.  Was the game decided on least wickets lost?  Six over countback?  Most boundaries hit?  No, nothing like that – just have to do it all again next Monday!!

Today’s last one goes back to 1994 and the first round of the Romsey Advertiser Knock-Out.  You will remember this is a 16 eight-ball overs competition and was a staple of the local cricket scene for many years.  We were drawn away at Mottisfont and what happened that evening will bring shivers to the spine of Paul Grinham, Mark Boston and Billy Sims (RIP).  Mottisfont batted first … well, we say Mottisfont … Easton & Martyr Worthy!  The home side opened the batting with Steve Green and his younger brother Shaun.  Steve went for 37.  It was the only wicket to fall.  Shaun cracked an unbeaten 83 in 64 balls, Andy Holmes blitzed 80 from just 32 balls with eight fours and five sixes as they amassed 212-1 in their 16 overs.  Nigel Hill got his four overs out of the way for just 23.  The others didn’t.  Sims went for 51 in his 4, Boston 61 in his 4 and Grinham certainly wasn’t smiling with 73 to his name in his 4!  We did give the chase a go – Mike Durand batted through for 54, Jimmy Gill 68 off 41 and Mark Hardy 20 not out but the hosts would run out 41 run victors.  It was a day few would forget!