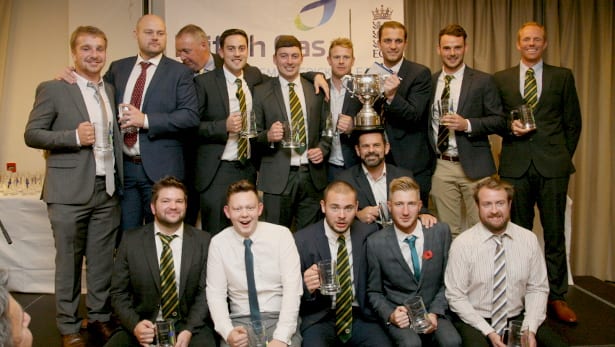 “Are we safe yet?”.  It was the Calmore Sports motto throughout the 2017 Southern Premier League Division One campaign.  After being promoted as the Division Two champions the season before, there were not many people around who were confident that we wouldn’t make a swift return to from whence we came at the first time of asking.

Nailed on for relegation was the general feeling.  Did well to win Division Two but wouldn’t cope with the higher intensity in Division One alongside the likes of Bournemouth, Basingstoke and North Hants, Liphook and Ripsley, Sarisbury Athletic and Ventnor, sides full of experience and Premier Division campaigns in the recent past.

An opening day win over Hook and Newnham Basics settled the early nerves with Tam Goodrich scoring 44 and Jack Rutter, our overseas signing from Melbourne, a brisk 45 before he scooped 3-39 in support of Mike West (3-18) and Mark Lavelle (3-18) sealing a 45 run win.  “The first weekend of the season was Hook away,” remembers Jack.  “Bombing Thaney [Ben Thane] for six over square leg and drinking their beers after!”.

But we were firmly brought down to earth in week two at May’s Bounty despite Ben Johns’ brilliant 100 from 140 balls, we would suffer a 53-run defeat.  Bubble burst – here we go then, those pre-season predictions were already coming home to roost.

Another trip up the M3 awaited in week three and we would return with a 20-run victory over Liphook and Ripsley as Rutter again took the bowling spoils with 3-39 and then came a massive win at home to Bournemouth, rolling them out for 109 with skipper Lavelle grabbing 3-18 and despite slumping to 63-6, Rutter (24*) and Paul Proudley (32*) saw us home.

Three wins from four became seven from eight by the end of June with comfortable wins over Tichborne Park, home to Ventnor, away at Sarisbury Athletic and back at Loperwood against Rowledge and we were sat at the top of the table.  Yes, that’s right, Calmore Sports, at the top of Division One.  It surely wouldn’t be long before the bigger guns just overpowered us and left us for dead.

The away game at Portsmouth was a bitter pill to swallow as, after being bowled out for 121, the home side would stutter to 74-6 and 87-7 in reply but still get over the line, Rutter’s wayward through gifting them the two wicket victory.  ““We had to lose sometime,” concludes the skipper, “so it wasn’t too much of a big deal but it was just disappointing to get close.”

Instead of licking our wounds, we got straight back to winning ways with a home win over Hook and Newnham by six wickets, Rutter’s brutal unbeaten 61 off 39 balls concluding the four-wicket win.

There were two teams vying for the title by this point.  Mark Lavelle’s underdogs and everyone else’s favourites for the title, Basingstoke and North Hants.  After this game, the upstarts from Calmore were thought to be put firmly back in their boxes and they would meekly retreat into a mid-table position come the end of August’s promotion picture shake-up.  We won the toss and chose to bat first and many would put Lav’s decision in the same category as Nasser Hussain in Brisbane and Ricky Ponting at Edgbaston as the top seven batsmen managed just two runs between them as former Hampshire quick David Griffiths took 4-27 and Martyn James produced a Wrightesque 10-8-8-5 to send us cartwheeling to 25-9.

One player tried his best to stave off the onslaught and that was Ben Johns who batted for 34 balls before he was seventh man out with the score on 16 – having made just a single!  This was going to be a very early finish and all credibility that we held as title contenders apparently in tatters.  We didn’t fall down quietly though as, making his debut for the club was former South Wilts bowler Dominic Ducellier and he, with the able assistance of Daniel Croft, would put on 85 for the tenth wicket.  Dom would become the first Calmore number 11 to hit a half-century with a blitzed 53-ball 58 while Croft faced 54 balls in his 23 not out as we would scramble to 110 all out.  There was no hurry for the visitors, they took 32.4 overs to knock off the runs three down with captain and another former Hampshire player Mitchell Stokes making 38.  The dream was over …. wasn’t it?

The next two weeks were washed out at home to Liphook and away at Bournemouth and we would defeat Tichborne Park by three wickets in the next game at the top end of August.

Next up was a trip to the Isle of Wight, to Newclose, to play Ventnor.  This was a game that could have derailed our season, especially Ben Johns was injured in the warm-up after being double footed playing football!  Ventnor were spun out by Lavelle (1-27), Manning (2-24) and Rutter (4-43) but the wicket of the day went to Dan Croft who removed Hampshire squad member Ben Duggan for 7 with “a painfully slow delivery that swung both ways,” as Rutter reminisced.  Michael Cook’s 38 and 28 from emergency number 3 Liam Newton – with Johns forced to bat down the order – saw us home by three wickets despite Rutter being lbw being hit in the box on the sweep for 0!

The home game with Sarisbury was washed out and we would beat Rowledge away by four wickets despite being 54-5 in reply.

So it came down to this final game – on Saturday 2nd September 2017.  Basingstoke were away at local rivals Hook and Newnham and Calmore had a tricky home game with Portsmouth, who we had lost to earlier in the campaign.

I am very grateful to skipper Mark Lavelle, all-rounders Ben Perry and James Manning and to Jack Rutter, who signed in from Melbourne, for their time in this final chat through of the season.  Thank you Gents.

ML – Going into the day, it was pretty tense.  All season we hadn’t really thought about winning the league but to have it in our own hands on the last day gave a much different feeling than previous Saturdays.  Nervous was an understatement!
JR – I was really nervous on the morning of the game, unlike any other game.  It was Lav who made me the most nervous!
JM – We were extremely nervous going into the game.  It was a big day for the club but we knew that we didn’t have to win the game, we just needed a certain amount of points.
ML – We knew Basingstoke had a tough game or so we thought and we went against our bat and squeeze mantra that we’d had all season to secure some bowling bonus points as we didn’t need to win the game to secure the title but needed around 7 or 8 bonus points depending on the Basingstoke result.  Going against our bat and squeeze mantra…. brave!
JM – Lav won the toss and chose to bowl first, much to my disgust.  We had used bat and squeeze all season so really no idea why he chose to change it and I told him as well!
BP – The day itself, I remember standing in the field and it felt like it wasn’t going to be our day.
ML – Portsmouth set out to spoil the party, they never really went after our bowling and just let us settle into our usual plans of keeping it tight and wait for the mistakes.
BP – It didn’t go to plan with the ball but we knew it was in our hands.
ML – We didn’t get the early wickets we wanted but a class leg side stumping from Cookie changed that and then Johnser ran out their gun county player, Fraser Hay, for 0 which always helps!
JM – We had them under the pump and we just had to keep it going and bowl them out.
ML – We struggled to take consistent wickets and for the first time, a bit of pressure was on us, we’d heard Basingstoke had rolled Hook for a low total so pretty much knew we had to bowl them out to make the batting side of things easier!
JM – But we let them off the hook a bit and they got to 189-7.
ML – We used seven bowlers to try and bowl them out but they managed 190 only 7 down, so we knew we’d have to get what we thought was 150 to secure the title … well that’s what I thought anyway!
ML – We lost Pez early but Cookie and Johnser settled then nerves nicely and at 130/1 we were nearly home!
BP – I can remember the patio filling up as we edged closer to the target.
ML – We then lost them both in quick succession and the pressure was well and truly on, even more so when I did the maths again and realised we needed 175 to secure the title!
BP – Lav then worked out that we needed more batting points than first though to make the title mathematically ours.  Cue slight panic!
JR – I was batting with Jim and thought we needed 150 to be confirmed as the champions but we actually needed 175!
JM – Lav told me that we needed 150 to get the batting points we needed to win the league and we got to just under 150.
ML – I ran the message out to Jim and Rutts that 150 was no longer the aim we needed 175 to seal it!
JM – He comes runs out to us and tells me we need 175.
ML – The reply I got from Jim cannot be repeated.
JM – I called him a ****!
JR – After Lav came out, I just wanted to hit boundaries after we got to 150 to finish the game and get on the beers early but Jimmy stopped me and said, “you’d be spewing if you weren’t out here when we won the title for this club”.
JM – Lav’s message made me quite nervous again as I thought we had already done enough.
ML – The boys negotiated it brilliantly, and going past 175 with ease and setting off great scenes in front of the packed pavilion it was a special moment, a lot of embracing and hugging, it didn’t sink in what we’d just done.
BP – The roar when we hit the winning runs and the buzz around the club was top class.
ML – From there on in, Rutts and Jim took the attack to them and we got home for the win in one of the most convincing Calmore chases I’ve had the pleasure of watching. Five overs left and seven wickets in hand, special!
JM – They bowled a spinner and I hit him it the car park three times!
JR – After giving me his rousing speech, Jimmy then mauled three huge sixes in to the car park to seal the win.
ML – To have the amount of Calmore family there watching and celebrating with us made it all the better!
BP – It was great day and a great season.
JR – The satisfaction of a job done when we weren’t given much hope at the start of the season, I have immense pride in what we achieved.
ML – It was a great day for the boys, an incredible achievement.

The 2017 season and we would become the first and only team in Southern League history to win back-to-back titles in different divisions.  Sealing the Division 2 title was special.  Winning Division 1 was sensational.