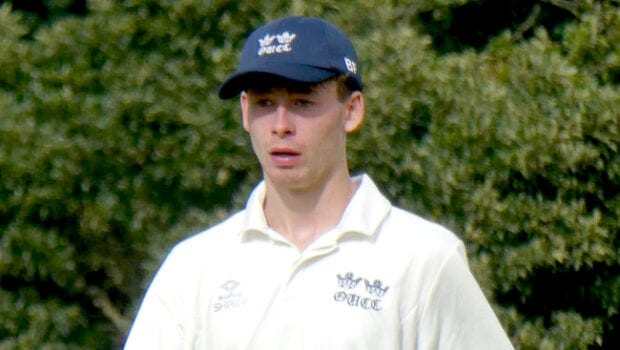 Calmore Sports’ winter signing Ben Fisher has joined an elite band of players from the club to play in first-class cricket after making his debut in the annual Oxford v Cambridge Varsity match at Fenner’s today.

Ben, who joined the club from South Wilts and instantly become a popular member of the first XI, received his Oxford ‘blue’ and snapped up the first two wickets in the Cambridge innings, in successive overs, as part of an impressive opening spell of 2-21, removing openers James Gillespie and Light Blues captain Nick Taylor.

Studying Bio Chemistry at Magdalen College, Ben is in his second year of a four year combined degree and masters.  He helped Oxford win the 50-over Varsity match on Tuesday with 11 not out with the bat, coming in at number eight and then dismissing Alex Moen on his way to figures of 1-26 from five overs as the Dark Blues romped home by 78 runs.

He is just the fifth player in Calmore Sports history to have played in matches with full first-class status but the first to do so as a non-professional with the club.  He was fortunate to feature this season as the Varsity Match will be losing its first-class status in 2021.

Kevin Emery was the first, playing for the club in 1990, our first season in the Southern League, having played 30 FC games for Hampshire from 1982 to 1984, sharing the new ball during that time with the late, great Malcolm Marshall.

In 1995, Calmore signed South African Kurt Donaldson who went on to play 4 FC games in South Africa.  In his final game for Natal B against Easterns at Kingsmead in Durban in 1998, Donaldson would open the batting and score 54 from 82 balls.  Coming in at number 8 for his team and scoring 3 not out in 10 balls – a 17-year-old Kevin Pietersen.

Paul Whitaker joined Calmore Sports in 1997 while he was at Hampshire and played 37 FC games for the county from 1994 to 1998.  Whitaker, who had the unusual trait of looking at his bat as the bowler ran in and, during one game against Lancashire, had Wasim Akram bowl at him while his head was turned checking his bat was in place!  Paul was an integral part of the ‘near-miss’ season of 1998 under good friend Martin Kellaway.

The fourth was Guernsey-man Lee Savident who also played for the club whilst on the staff at Hampshire, playing 4 FC games from 1997 to 2000 and claimed Michael Vaughan as his second FC victim with the ball.

James Hibberd did play in a three-day match for Hampshire while he was on the playing staff for the county but the clash with Cardiff MCCU in 2004, where he scored 33 with the bat and took 5-72 with the ball, was not classed as a fully fledged first-class match so – sorry Hibby – you are not permitted to be on this list!

The messages of good luck came thick and fast from Ben’s club mates at Loperwood Park.  He might have only been with the club for a short while but the club are delighted for him and wish him every success in his first-class career.

And, from the author’s point of view, welcome B.A.J. Fisher to my first-class database, player number 52283 (that isn’t the amount of players who have played first-class cricket, that is just his number in the database).