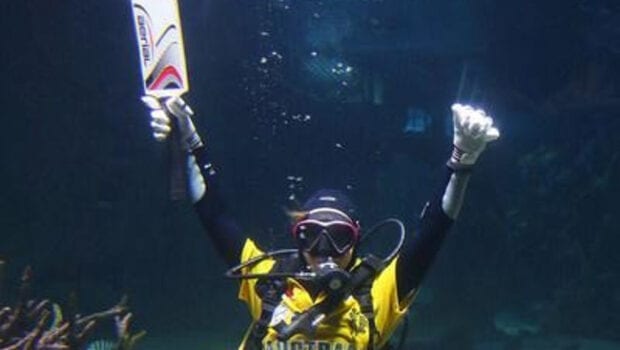 It was a day that many have tried to forget.  It was a day that promised so much but only delivered disappointment.  But it wasn’t so much the day that will be remembered but the season as a whole that will mark the 1998 campaign as one of the clubs’ finest.

Welcome to the latest instalment of “On This Day” and today is a look back at just one day – 29th August 1998.  Despite the result of the game this very Saturday 22 years ago, Calmore Sports were punching with the elite of local cricket and loving every minute under the astute captaincy of Martin Kellaway.

After coming third in our first season back in the Southern League in 1995 – we would play in the league from 1990 to 1992 before sinking back to Hampshire One for a couple of seasons – we would sit in mid-table in 1996 and 1997 so there was no real sign of what was to come.

What did come was a start to the season containing six consecutive wins, despite three of them being nail-biting, nerve jangling affairs.

A Tom Pegler inspired run-a-ball 100 at Havant on the opening day, where he shared an opening stand of 170 with Paul Draper, who also took 3-62 with the ball, saw us beat the reigning champions by 48 runs at Havant Park to get us off to a flying start.

Paul Whitaker’s 61 was the mainstay of our 156 against Winchester KS before the former Hampshire man claimed 3-49 along with Steve Brandes’ 2-27 and Draper 2-41.  It came down to the last ball with skipper Kellaway running out Martin Taylor to seal a one-run win.  Two from two.

This would become three in equally nervous fashion as we would beat Burridge by two wickets thanks to James Hibberd’s 72 and a resolute stand of 32 between Clive Surry (31*) and Brandes (14*) saw us home with an over to spare despite Paul Jenkins taking 6-68.

It was easier the next week at home to US Portsmouth who were vanquished by six wickets before probably one of the most crucial victories came down the road at BAT Sports as Brandes and Graeme Lyon scampered the runs needed to seal a one-wicket success after Terry Rawlins had taken 7-47 for the home side.

Plucky little Calmore were five wins from five starts!  So we would travel to South Wilts with plenty of encouragement and it was well founded as our 161-9 proved to be enough with Brandes returning 4-28 and Draper 3-23 as the home side were defeated by 46 runs.

This win sandwiched two abandonments against Bournemouth and Andover so we reached the end of June unbeaten – could we dare to dream?

That run would come to an end on 4 July at Hungerford as Rob Budd (73) and Kellaway (55) efforts would prove not to be enough against Hampshire’s Julian Wood (68) and Middlesex’s Toby Radford (53*) as they would get home by six wickets.

Having been unbeaten through May and June, we would not win a single game in July as the Hungerford loss was followed by a no-result at home to Romsey and defeats at Hambledon and home to Lymington.

However, our nearest rivals Hungerford were also not winning.  A no-result against Waterlooville and a defeat at Winchester KS would keep the title race wide open.

We would get firmly back to winning ways at the start of August as Old Tauntonians were put the sword by Paul Draper (112*) and Martin Kellaway (141*) in a rain affected run-rate win and we would squeeze past Portsmouth by two wickets a week later after John Shepherd (4-52) and Draper (3-47) had reduced the visitors to 185-9 and it needed Gregg Lewis’ unbeaten 41 and Lyon with 8* to see us to a vital win.

We would be washed out after just 7.2 overs at Liphook but Hungerford managed to see off BAT Sports by 3 wickets.

Then came the big week of results.  Going to Bashley (Rydal) is never an easy task but we would return through the Forest with a massive seven wicket win while our Berkshire rivals were coming unstuck at Chapel Gate by 19 runs.

So it came down to this day in 1998.  Maybe it is slightly ironic that, in 2020, our first XI travel to Rowlands Avenue tomorrow to play against a club that have become so synonymous with Calmore Sports since that day.

With thanks to Paul Draper, James Hibberd, Clive Surry and Steve Brandes, here is their account of Saturday 29th August 1998.

JH – It was the worst day in my cricketing career.  I was so excited to be part of probably Calmore’s best ever team and finish.  We had a great team, covered all bases and a lot of experience.  I learnt so much that season, things that have carried with me my whole playing/coaching life.

PD – The 1998 season was progressing well for the team as we were in a good run of form and has used a consistent team for the majority of the season.  Our game plan was to bat first, score the runs and then let our bowlers get to work restricting the chasing team.  Kellas lead to team brilliantly well in these times.

JH – The morning of the game, I couldn’t have been more excited.  A win would mean us winning the league and a hell of night!!!

PD – I recall we were top going into the last game from Hungerford by a few points but we still had to win the game against near bottom of the league Waterlooville.  I don’t believe anyone within the club thought it was an easy win, we prepared as we had done every week prior to this season ending game.

JH – It didn’t quite work out.

PD – The day or night before the game we had heavy rain at Loperwood and this got under the covers and the pitch was wet when we got there.  The wicket was wet but everything was fit for play.

CS – The memory is pretty hazy these days but I seem to recall going into the game needing to win to have a chance of winning the league.  There seems to be some debate about whether it was a wet one that day.

PD – We won the toss and we batted first, exactly like our game plan for the whole season.  I know Kellas thought and considered bowling but we had done great all year batting first so we stayed with that plan and everyone agreed.

JH – We batted first on a lively wicket, it had rained overnight.  We should have fielded first!!! Kellogs was an excellent captain so what did I know.

SB – Martin was a very good captain for the club and led the side brilliantly but he really got that one wrong.  On that pitch, we definitely should have bowled first.

CS – After Kellers decided to bat first we struggled to muster much of a score.

PD – It was tough batting first against their seamers on a wet deck.  An attritional start, right up my street!!!  We lost a couple of early wickets but I was in confident mood and batting my way.  Kellas and I were starting to build a total and I played an awful shot and was bowled for 32.  I remember it well, a stupid shot, trying to dab / work the seamer to third man and played on! Shock !!! Awful shot!  Kellas fought hard for 48no and got support from Clive, Hibby and Garras with teen contributions but we got to 169 all out.

JH – We managed to get upto a score that was ok.

CS – We still felt confident of a win.

PD – The weather was drying the wicket out but we had fought hard all year and again in this game so we felt 169 was something to bowl at.  We were up for it as normal but Waterlooville batted well and comfortably beat us.

PD – Kellas tried everything with every bowler to get breakthroughs and wickets but we just could not do it but credit must go to Steve George, who batted superbly, and John Harris as they chased down our 169.

CS – Although George scored 80 odd it was John Harris who was the pain in the proverbial.  No matter what we threw at him he batted through unbeaten for 50 off plenty but as he probably did many times saw them home.  Despite his best years being behind him you could see his class. A difficult opponent who you had to respect.

PD – Credit must go to all the Waterlooville as they were the better team on the day but that did not stop us all from hurting badly at the end of season celebrations.

JH – We had lost to the near bottom placed team!  I am not embarrassed to admit being in tears in the changing room after!

PD – I recall being very hurt at not finishing the job off and winning the league, it still hurts now, but we all drowned our sorrows at the end of season party and I cannot remember anything of the party!

JH – It did give me the motivation to win the league in later years but winning it six times still doesn’t make up for that day with Calmore!  It still haunts me.

PD – We had a great season, playing together in a great Calmore team, brilliant team spirit, we had fantastic support from a very loyal group of home and away supporters and from everyone at the club.  It was a massive disappointment that we did not finish the job off!

Hungerford defeated South Wilts and the title was theirs.  It was a desperately disappointing day, one of small margins, what ifs and nearlys.  We would finish second in the first year of the Southern Premier League in 2000 as well.  But that 1998 season and that day 22 years ago still haunts so many to this day.

It shouldn’t be forgotten what a sensational season it was though.  Paul Draper scored 487 runs and took 22 wickets, Martin Kellaway 341 and Rob Budd 278 took the batting honours while Graeme Lyon (15 wickets) and Steve Brandes (12) backed the slow left-arm spinner up.

Of course, one of the Calmore team did get their hands on the Southern League trophy that season!!!  Didn’t they, Graeme!