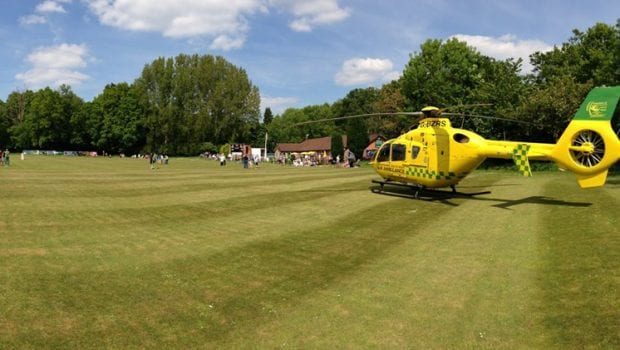 CALMORE ON THIS DAY – ADDITIONAL!!!

In yesterday’s “On This Day”, I gently passed by the SPCL Twenty20 Cup match at home to New Milton in 2013 as the bare facts of the game were that we were hammered by eight wickets in fairly quick time.

Mark Lavelle’s 19 was the only double figure score in our 63 all out and New Milton knocked them off in 11.1 overs with Lav and James Rose taking the only wickets to fall.

But, of course … who could forget (well, me obviously!!) that the game was interrupted by the Hampshire and Isle of Wight Air Ambulance landing in the corner for the ground to attend an accident just outside the gates on Loperwood Lane when a Skoda Octavia car overturned, trapping the driver.

All three emergency services were on the scene which halted the game – not that it saved us from defeat.  Unlike it did some 17 years previously at Lordshill Recreation Ground against Old Tauntonians – you will have to wait until ‘On This Day’ on 8th June for that one!