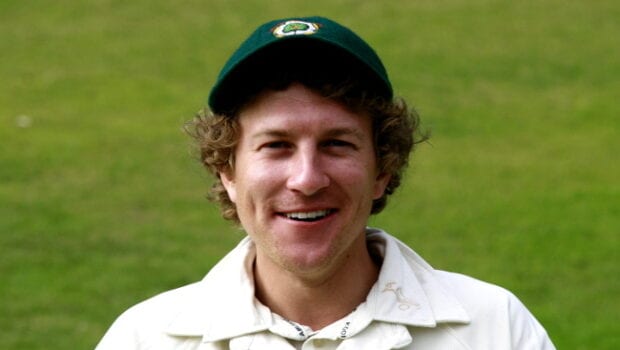 CALMORE ON THIS DAY – May 28th

Another sunny day – and still no cricket, apart from some nets!  So, it’s time to look back once again on the events “On This Day”, the 28th May with a delayed league debut for a player few at Calmore Sports Club will forget!

We have had many overseas players over the years – some have left an indelible mark on the club and are remembered fondly.  One such player – another from our ‘sister club’ Brunswick in Melbourne – finally made his league debut having been forced to sit it out for a month after being hit on the finger by pace demon Paul Proudley in the nets!  Brenton Allan arrived in 2011 and marked his card early with an excellent 90 not out against Gosport Borough in a pre-season friendly and then helped the Third XI beat the Fourth XI the next day in a Sunday game at Loperwood with 35 down the order.  Hopes were high that the curly-haired Aussie would be on for great things … until he got pinged!

He finally made his debut on this day at Trojans and helped us to a 50-run win – our second win of the season.  Whilst he only scored 6, it would be with the ball that he would contribute most in this game.  Darren Vann’s 42 along with Pete Clark’s 33 and a crucial unbeaten 37 from Mark Lavelle – his second highest 1st XI score in his 52nd innings – guided us to 203-9 in our 50 overs.  Luke Johnson removed Simon Williams and Ed Boyd at the top before an inspired bowling spell of 4-37 from Mike West, in his first season of an expected three-year stay with the club – because Westy doesn’t tend to stay at a club longer than that – sent the middle order off.  Brenton’s 3-14 closed the innings out and the hosts were bowled out for just 153.

However, was today the day that we unearthed two precocious young talents playing down the Old Ground and nearly taking us to victory for the Fourth XI against Langley Manor 4s?  A 99-run partnership between 14-year-old Michael Donovan, who hit 65 and 42 from 13-year-old Ben Johns lifted Woody’s mix of youth and experience to 172-9 – the side also contained Callum Stanton (aged 13), George Woodhall (age 14), Matt Taylor (age 13) and Tom Pattison (age 14) – all of whom went on to play for the 1st XI.  The visitors’ opener Newman carried his bat for 84 and saw his side to the win despite Woody’s 3-32, Dave Johns 2-18 and George Woodhall 2-33.

We now fast forward to another important win for the 1st XI in the Championship winning season of 2016 when we travelled west to play South Wilts II in SPCL Division 2 which maintained our 100% start to the campaign.  The home side won the toss and elected to bat first and it was the first time in a league game that a Calmore legend was joined by his son in the opposition.  Ben Draper, who would play for us in the U19 T20 Cup more recently, made 16 and father Paul 15 as they were blown away for 134 as Steve Wright took 3-30 and Mike West – now in his sixth season with the club – grabbing 3-21.  We lost skipper Mark Lavelle second ball but Tam Goodrich with a controlled 60 and Ben Johns 38 eased us to the win with more than 12 overs to spare – Drapes snr going wicketless but bowling 10 overs for just 15 … still life in the old dog!

The 3rd XI produced an excellent team performance in thrashing Bashley (Rydal) 4s on the second pitch in the Forest by 8 wickets and it was all down to the youngsters!  Ben McCartney (2-51), Calum Bailey (2-35), Ryan Lomax (2-18) and Adam Pattison (2-20) all pitched in with a couple of wickets as the hosts reached 181-9 from their 42 overs, certainly a testing target.  Well, you would think so … but we completed the chase with 15 overs to spare with Jack Nicholson hitting 14 fours in an unbeaten 81 and Michael Donovan a swift 60 not out as they put together 112 to race us to the victory.

In 2005, we welcomed Ventnor to Loperwood in SPCL Division 2 and we were well beaten by 7 wickets.  Simon Ennew with 48 opening the batting and Pete Clark 34 top scored but a devastating spell from Western Australian Orazio Santalucia (5-39) saw us crash from 170-6 to 177 all out.  Jamie Winters with 2-57 was the pick of the bowlers but Ventnor won at a canter.

The start of the 1994 County One season had been nothing but frustration with the weather.  In the first three weeks of the season, only 16 overs had been possible up at Hook two weeks previously.  And the rain would wash out next week’s game as well at St.Cross.  The only moment of sunshine across this five weeks of despair came at Rowledge in a very low scoring match.  We won the toss and elected to bat first and the second wicket partnership of 43 between Paul Draper (17) and Adam Carty (19) proved to be absolutely critical as we would find ourselves bowled out for just 98 – Stuart Bailey’s 18 the only other double figure score.  It would take a collective effort to bring anything from this game – and that’s what we got!  Steve Brandes got 4-15, the first four wickets to fall, Keith Woodhall took 2-31, Kevin Marshall 2-13 and John Shepherd 2-1 as the home side succumbed for only 83 for us to take an unlikely 15-run win!

We mentioned earlier on about the youngsters winning the game.  In the 4s game at home to Bisterne, it was very much the old boys to the fore. Ray Hurst rolled back the years with 2-41 and was joined by Neil Dennis (2-24), Graham Hurst – no relation (2-27) and Mike Lockyer (2-10) in dismissing the visitors for 163.  A 131-run opening stand from Graham Love, who cracked a brutal 85 with 3 fours and six sixes was joined by John Ennew’s 40 not out as we cruised to victory by three wickets.

Last, but not least, we are going to head back 60 years!  Of course, this was well before league cricket started so it was a friendly at East Tytherley on this particular Saturday afternoon in 1960 and resulted in a tense nine-run win in this declaration match.  It has to be said that this is quite an unusual game!  The Calmore XI batted first and edged their way to 93-8 before declaring after 32 overs.  R. Wilton was the backbone of the innings, making 38 before being run out, Vic Loveless was at the other end!  Ron Stuttard’s 21 late on ensured the captain had something to bowl at.  And bowl at it they did, especially the youngster Maurice Geary with rattled through the Tytherley batting line-up (most of whom wouldn’t have been wearing batting gloves!) with 7-26, pushing the hosts to 84 all out in 42.2 overs – some ten more overs that we faced!  The seventeenth century Inn that stands next door, The Star, would have been a happy place for the visitors.