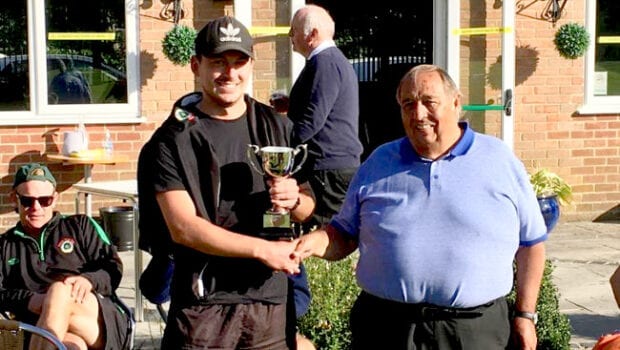 Ben Perry has been rewarded for an outstanding season in the 1st XI in 2020 by being announced as the winner of the “Yorkshireman Trophy” following the final SPCL COVID Cup game with Andover on Saturday.

Pez closed the shortened season with 12 wickets across the seven games, leading the wicket-taking charts with Yannick De Mezieres Lepervanche.  His haul of wickets though came at just 8.66 runs each and an economy rate of 3.42 – both the lowest average and most economical of all the bowlers this season.

The presentation, off the back of the six-wicket victory at Loperwood Park helped by Ben’s 3-19 in six overs, was made by ‘Yorkshire Alan’, as he is known to all, a supporter of the club who travels down from Rotherham to watch the first XI home and away every game without fail and awarded the trophy to Ben for his efforts this season and having the biggest impact on games during the season.

“Pez gets the award for consistently taking wickets every week and being economical in the process, backed up by his support as one of the older members of the squad using his experience to read game situations,” said Alan in his post-match speech.

Club captain Mark Lavelle also wanted to pay tribute to Alan for his unwavering support.  “The lads are hugely thankful for Alan along with Lesley and Stewart for the support they give us home and away.  In the winter, all three of them will be back throwing on their rugby colours and backing the Rotherham Titans when rugby is able to resume again but their support of Calmore Sports is outstanding and we love having them around.”

Ben is the third winner of the “Yorkshireman Trophy” after Ben Johns lifted it in 2019 and Mike West won it in 2018.