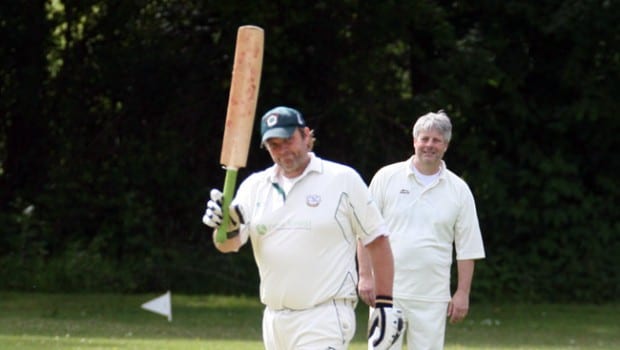 It was the league leading Fourth XI that carried the Calmore flag this weekend as a brilliant century from Nigel Hill and a first senior half-century from Callum Kitcher guided them to a 95-run victory over Locksheath III at the KGV.

FIRST XI: The toss is proving to be something of a curse for skipper Mark Lavelle as he, once again, won the toss in this game but saw his side crash to a desperately disappointing defeat against mid-table Rowledge, which leaves the ‘More in the tightly bunched pack of five clubs with two wins from seven starts and just one point off the foot of the table.

An impressive start from Paul Proudley and Steve Wright restricted the visitors early on as Proudley (1/16 in 8) and Wright (0/14 in 10) held Rowledge to just 61 for 2 at the drinks break.  Lavelle did his bit as well with a miserly 10 overs for 24 but Rowledge still had the experienced Chris Yates at the top of the order and he remained resolute with 86 from 132 balls (5 fours, 2 sixes), which anchored the innings.

Some lusty blows late on lifted the total to 175-9 in their 50 overs, which was certainly well below par.

As it turned out, it was plenty as Calmore had no answer to the accuracy of overseas seamer Alex Bloomfield, who returned 5/31 in 10 overs in unison with the other Chris Yates (10-5-18-1) as some pretty ordinary batting accounted for an all-out total of just 59, being dismissed before the drinks were required second time around.

SECOND XI: The Second XI slipped to a narrow nine-run loss at Privett Park in Gosport despite restricting the home side to 176 in their innings.  Allan Hurst removed Robson with just 3 runs on the board but steady if unspectacular batting from Srinath Nugegoda (49), Gravells (25) and Langridge (26) stepped up the scoring against some decent bowling.

Hurst finished with 3/25 in his 10 overs and the metronomic Paul Henry 2/31 in 10 as the hosts lost regular wickets.  However, they managed to clamber their way to 176 as Harry Morgan grabbed a couple of late scalps (2/17).

The Calmore response started in similar fashion to Gosport’s as opening batsman Dave Blake was removed for 2 before Matt Taylor (41) and Paul Henry (26) came together.  The latter and George Woodhall were dismissed in successive balls but the in-form Jack Nicholson was bright in his excellent 52 off 82 balls and with Paul Bielby (28) looked to be taking the visitors to victory.

THIRD XI: It was a pretty miserable trip to Parley for the previously second placed Third XI as they were rumbled for just 52 and the match was all over within 34 overs of the scheduled 84.

Only having 10 players certainly didn’t help the cause but the steady Parley bowling took its toll as Wides were the Calmore top scorer with 18 followed by opener Darryl McMahon (12).  Miller (4/12), Elrick (3/30) and Ayres (2/10) did the damage for the home team.

Early wickets were certainly required.  They didn’t come!  Markham (27*) and Rake (18*) repelled the five-man bowling attack with Tom Houlder’s four overs going for just 7 and Kaine Stanton’s four conceding only 12.  But it was a 10-wicket loss which sinks them down the table to seventh.