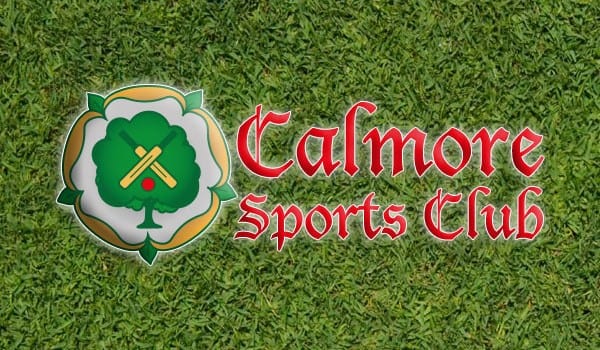 Six wins from six as Calmore have Perfect Weekend

It was a sensational weekend for Calmore’s senior sides as they recorded “The Perfect Six”, including a local derby triumph in the Southern Premier League, a side jumping to the top of the table, another moving into second place in their league and also progression in both the SEPCL T20 and New Forest President’s Cup.

The first XI claimed their second league win of the season on Saturday in SEPCL Division 1 with a comprehensive 7-wicket victory over floundering Totton and Eling at the Linden Oval, a victory which could only be described as a pure team effort to down the once powerful local outfit and leave them slumped at the foot of the table.

The home side won the toss and got away to a positive start with overseas player Andrew Fletcher and ex-Bramshaw man Tom Arnold sharing a 90-run opening stand before some smart work from skipper Mark Lavelle saw off the latter for a patient 35 from 84 balls.

Calmore’s response was outstanding as Lavelle led the way with a fine 76 off just 72 balls (15 fours) after he shared 51-run partnerships with Vann (a run-a-ball 23) and 85 with Ben Johns (29 off 35).  On the captain’s dismissal, James Rose and Callum Holloway, back on his former home ground, guided the Loperwood Park men to the victory with 71 balls to spare.  Youngster Elliot Taylor was the pick of the T&E bowlers with 1/35 in his 10 overs, although he could have had 23 wickets in the innings had all of the vociferous appeals been upheld by the unintimidated umpires.

The state of world order in the Totton area was restored.  SCORECARD: http://cricketarchive.com/Archive/Scorecards/761/761784.html

Meanwhile, back up at Loperwood Park, the Second XI were getting back to winning ways in clinical fashion as they demolished winless Sarisbury Athletic 3rds by a mammoth 139 runs.

Despite losing a wicket without a run on the board, Matt Taylor (55), Michael Cook (60), Mitch Parker (60 off just 49 balls) and George Woodhall, with a swashbuckling unbeaten 54 in just 37 balls piled on the misery for the Athletic as Calmore closed on 270-6 in their 45 overs.

This was always going to be beyond Sarisbury, especially when they crashed to 37-6 against the metronome accuracy of Dan Croft (4/16 in 10 overs) and the occasionally wayward Harry Morgan, who threw down 10 wides but still returned an impressive 2/40 in 10 overs.  There was some late resistance from Keith Hammond (40 not out) but Paul Henry does what he does by cleaning up the tail with 3/19 and the 2s marched home with ease.  SCORECARD: http://cricketarchive.com/Archive/Scorecards/799/799025.html

Down at the ‘Eric’, Calmore Thirds climbed into second place in Regional Two West with an easy 6 wicket victory over Fawley 3s.

A good fielding display from Mike Cotton’s men (standing in for the indisposed Corporal Goat) saw the visitors removed for just 99 in 33.1 overs as Liam Worrow turned in a brilliant showing with the ball, taking 5/19 in 8 overs – which included four maidens.  Waqas Anis with 35 for the Oilmen was the only innings of note as Worrow and then Callum Bailey, who grabbed the final three wickets in snaffling 3/24, ensured they didn’t reach three figures.

It took less than 20 overs for the home side to claim a vital 23 points tally as Adam Pattison (20) and a no-nonsense 25 not out from Dave Rose, which saw the ball disappear out of the ground twice, passed the target with 134 balls to spare to move into second behind unbeaten Winton II, who come to KGV in mid-August.  SCORECARD: http://cricketarchive.com/Archive/Scorecards/800/800274.html

It didn’t take long for the Fourth XI to get back from their Regional Four South&Central match at Broughton either – the game being completed in just 30.5 overs with a 7-wicket triumph for Mark Stanton’s men, who remain unbeaten and sit top of the table as they only team without a loss in the division.

A stunning spell of bowling from seamer Matt Crowe decimated the Broughton top order as his six over spell claimed 4/12 which put the home side right behind the eight-ball.  Spinner Connor Pengelly and quickie Jack Stuttard both grabbed three wickets each as Broughton were dismissed for just 52 inside 20 overs.

Owen Fee wasted no time with a quickfire 14 while Kaine Stanton smashed four fours in his unbeaten 16 as the Fours cantered home in just 11.3 overs and were all done by 4pm.  SCORECARD: http://cricketarchive.com/Archive/Scorecards/803/803017.html

Four Saturday wins from four – a great day indeed and it was continued on Sunday as the first round of the SEPCL Twenty20 competition kicked-off with the visit of Division Three side Waterlooville.  In a nail-biting contest, Calmore finally secured their first T20 win since returning to the Southern League in 2010 with a three-wicket success in the final over.

Winning the toss, Waterlooville elected to bat first but only opener Tim Jackson went past 20 with a steady 41 off 50 balls as Steve Wright (2/17) and Luke Johnson (1/20) kept the bowling tight at the top.  They were excellently supplemented by Mike West who bowled his 4 overs and just 12 runs, taking the wickets of captain Scutt and the dangerous Mengham while James Rose found plenty of turn as he claimed 3/16 to close the innings at 115 all out four ball short of their quota.

However, the home side found it far from easy themselves and slipped to 57/6 as the ‘Ville found a way through the defences of Lavelle, Vann and Rose before Proudley smashed a six into the car park before holing out and when Pegler and Johns were both removed, the game was sliding away from the hosts.

It took the experienced heads of Mike West, who struck a crucial 32 off 30 balls, including two large sixes and Ben Perry’s supportive 15 not out off 20 balls, coupled with a handful of wides from Hudson, finally saw Calmore over the line with an over to spare and now face a trip to reigning champions from the last three years, South Wilts.  SCORECARD: http://cricketarchive.com/Archive/Scorecards/836/836092.html

Could the senior sides make it six from six when they stepped onto the first for the third day in a row – this time facing Sway in the first round of the New Forest President’s Cup.

Electing to bat first, Calmore lost Matt Taylor early and wickets were tumbling at fairly regular intervals with Vann, Brandes and Holloway all making starts before being dismissed.  But the Hampshire Division 3 South outfit couldn’t find a way past Ben Johns, who carried his bat for 73 including 7 fours and 4 outstanding sixes as the ‘More totalled 131 for 4.

Sway made a very positive start to their innings with Tim Noble and Neil Prince adding 74 for the first wicket but West removed the latter and Dave Steadman in quick succession and while Neil Atapattu kept Noble company for a while, they were both dismissed along with Sam Nailer within two runs of each other, leaving the visitors 106/5 with overs running out.

Some tight bowling at the end ensured Calmore got home by 11 runs with West (2/19) and Rose (2/36) the pick of the bowlers.  Calmore now head to Langley Manor in the semi-final on 22 June.

So, 6 wins from 6 senior games over three days.  If Calmore did weekends, they would be the best weekends in the World!