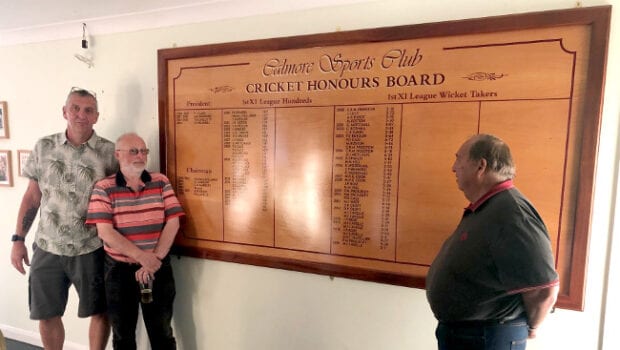 Calmore Sports Club had the great honour of unveiling its first ever ‘Honours Board’ following the President’s Day fixture which closed our 2020 cricket season.

The board, featuring the 1st XI century makers and five-wicket hauls since 2000 – the year the club were a part of the inaugural Southern Premier Cricket League – was well received by all and is the centrepiece of the clubhouse wall.

The idea of the honours board, which has been muted by the club for many years, came to fruition following lengthy discussions and the availability of some finances allowing us to put it together.

“Our club treasurer Ollie Tull has been keeping some money aside for this for some time,” said club chairman Pete Lavelle.  “But we are hugely grateful to “Yorkshire Alan” and his family, Stewart and Lesley, who helped us with a very generous donation as well (they are pictured on the front page picture).

“We did want to cover all of the league years from 1974 but there just wasn’t the space on this board and we hope that this board will last for another 20 or so years, depending on how well the players do in the park.

“It is our intention to mark those achievements from 1974 to 1999 in a specially bound leather book, which we will have written in calligraphy style and put on display in the trophy cabinet or something similar but it will definitely be covered.”

It is a wonderful addition to the club and will act as a target for future players to ensure they are featured. 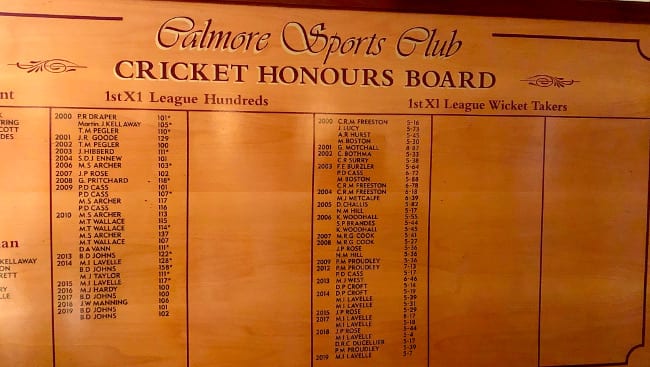