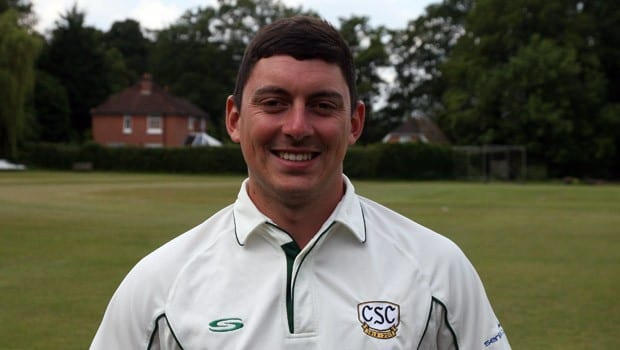 CALMORE ON THIS DAY – June 22nd

Good morning and welcome to Monday.  There are some really good vibes coming through with a view to some sort of cricket restarting soon.  Let’s hope so – everyone is missing it desperately and just wanted to get the whites on, get out there and play.  Until then, we continue with a look back on events of 22nd June over the years.

With it being Monday, we can look back just 12 months and the four matches played in 2019.  Unfortunately, we start with a tough day at home against Sarisbury Athletic when the captain played pretty much a lone hand in the 65 run defeat, although Ben Perry did put in a valuable, if forlorn, effort too.

Sarisbury elected to bat first and, against the metronome Steve Wright (0-21) and Allan Hurst (1-25), who bowled nine maidens in their combined 20 stint, they were finding it hard going but kept wickets firmly in tact.  Once they were seen off, Ricky Rawlins (45), Tom Mills (36) and Tom Nightingale (50) started to take on the attack.  Mark Lavelle (3-27) and Ben Perry (3-19) did their best to stem the flow and did so effectively to hold the visitors to 185-7, which was certainly a gettable target.   When we crashed to 25-5, that hope subsided.  A partnership of 88 between the captain, who hit 58 and his trusty lieutenant Perry with his dogged 91-ball 19 raised the stakes but when the latter was bowled, it hastened the end as we lost 5 for 7 to be bowled out for 120 and send us to a sixth defeat in eight.

The 2s returned from Hythe and Dibden 2s with a five wicket win in a very low scoring, almost 1980s style, contest in County 3 South.  A devastating opening spell of bowling from Harri Williams decimated the home sides’ top order as he claimed 4-15 and with Storm Anning (2-30) and Ciaran Simpkin (3-9) hurried Hythe to 54-9.  Some late resistance, by way of a stand of 27, at least gave them something to bowl at with 81 all out on the board.  Our reply wasn’t without its pitfalls but Ryan Lomax’s steady unbeaten 26 watched the wickets fall at the other end and we got home by just five wickets in the end.

It was a tough trip to Broughton in Regional 1 North-West for the 3s as they were well beaten by seven wickets.  We weren’t looking too bad at 90-2 with Paul Lock (26) and skipper Paul Jewer (38) going along quite nicely.  But their dismissals opened the door and we lost 8 wickets for just 11 runs to be bowled out for 101.  A highly economical spell from Paul Henry (8-2-8-1) did his best to restrict the hosts but it wasn’t to be although they did take 37 overs to reach their target.

West, Lavelle, Cass, Proudley, Johnson, Walton, Pegler, Woodhall, Bailey – a cast of 1st XI regular names over the last few years.  OK, some of them aren’t the original cast but the names are the same.  So it was quite a 4th XI that tackled Easton and Martyr Worthy 3s down at the Old Ground and squeezed home by just one wicket.  What a game this was!  Bradley Jewer and Roy Walton took a couple of wickets to reduce Easton to 23-4 but they had a solid partnership which eased them.  However, Keith Woodhall’s typical rearguard 4-17 extinguished the innings for 152.  All of the batsmen got starts but none, bar Paul Proudley (25) made it count and we were staring at defeat when we were 130-9.  But at the crease, batting at number 9, was the 1st XI leading run scorer of all time Tom Pegler and with him, Bailey (ok it’s Calum not Stuart!!).  Calum made 6 not out but it was Tom, with four sixes in an unbeaten 34 which took us over the line in the narrowest fashion.

We don’t feature Sunday friendlies very often but this one is worth a few lines – if only because there was a superb partnership, yet again, by two men who have already been mentioned in today’s edition.  It was a home friendly against Cadnam in 2014, a 40-over contest.  In among the fun of using 10 different bowlers, Luke Evans made 56 and Josh Gates 35 which took the visitors to 198 all out – Ben Johns took 3-26 and Ben Perry 2-8.  We soon found ourselves 40-3 but it just paired Ben Perry and Mark Lavelle at the crease and they would stay together and bring a seven wicket win – Perry finishing 105 not out and Lavelle 58 not out in 50 balls.

Rain and Sparsholt – they seem to go together when its recent matches in the SPCL and it happened again in 2013 but this time Sparsholt got the better of the contest to win by 60 runs in a revised target.  With the weather not looking so good, we won the toss and put the home side in but it didn’t work out as Edmund Jenner (47), captain Lewis Dunford (70) and middle order David Gough (38) were instrumental in taking them to 202-9 in their full 50 overs.  Elijah Turriff-Smith was the pick of the bowlers with 2-29 while Mark Lavelle grabbed 4-39 but in only six overs.  Steve Wright bowled his 10 overs for just 2-17 – standard stuff from the young veteran – and with a revised target of 181 to win in 40 overs, we made just 120-9 as Gough tore through the middle order with 5-34.  Guess who got some runs – it’s Pez again with 27 not out!

When you factor in that the other three sides in the club played just 13 overs between them, to get 90 overs in the micro-climate of Sparsholt was a surprise.  The 2s had reached 22-0 off 13 overs in their home game with Hambledon 2s while the 3s and 4s were both called off.

Ummm – there was a Border League Cup quarter-final against Highfield in 2010.  Highfield scored 152-7 in their 18 overs which was impressive enough.  However, we got home with seven balls remaining with Mark Archer making 22.  But it was a partnership of 105 which was key to the chase and it was between …. need you ask???   Pez (74 not out) and Lav (41 not out).

There was more time cricket in 2002 when we hosted Portsmouth, who again had four county professionals in their ranks and claimed a winning draw from this encounter.  The visitors batted first and it was innings of starts but no real sizable contributions.  Warren Swan’s 43 top scored along with Lee Savident (32), Geoff Pike (37) and Matthew Keech (30) taking the City side to 226-9 with Matt Metcalfe claiming 4-46 and Allan Hurst 3-31 in 18 overs.  Our reply was based around James Hibberd’s fine 87 not out but he received little in the way of support save for Clive Surry’s 24 as we reached 177-8 – Savident taking 4-45.

Gosport Borough were the hosts in the Southern League in 1996, where we had had a rather indifferent start to the season with two wins and three defeats to our name.  We would level the scores with a dominant 102 run victory thanks to three outstanding performances in the main.  Choosing the bat first, Rob Budd must have seen something he liked about the wicket as he and Paul Draper proceeded to post an opening stand of 178.  Draper made 66 but Budd went onto his third 1st XI ton in reaching 101 on our way to 244-6 in 50 overs.  Grant and Rees made 60 but the introduction of the spinners – as is so often the case – put paid to their hopes as Kevin Marshall scooped 6-38 and Mark Boston 3-37 to down the Borough for 142.

It was a Wednesday night in 1983 and the semi-final of the Sydney Wyatt Knock-Out where we would take a trip through the Forest to Ellingham.  The home side batted first and made a challenging 116-3 with a wicket apiece for Steve Brandes, Billy Sims and Richard Rogers.  We lost wickets all too readily in the reponse but Paul Hoskins’ undefeated 62, with four fours and three sixes was the glue to the innings which took us to victory off the last ball with Baz Oram at the other end.  The final, in two and a half weeks time, was against Lyndhurst at Bolton’s Bench.  Would we win it?

There was a little bit of history repeating itself in the Southampton Parks League competition, The Hector Young Trophy, involving us and Southampton Wednesday.  In 1968, the rain came to cancel out our first meeting, which forced a replay.  Two years later in 1970, this second round tie would end in dramatic fashion.  Southampton Wednesday batted first and Michael Newman helped hold them to 133-7 in their 22 overs as he claimed 5-52.  29 from Ben Lyon and 24 for Ron Merritt were the lynchpins to the chase but, with the last ball of the innings, we needed one to win.  Chick Chandler facing Ivan McMorran, who had already taken seven wickets having bowled through the innings.  One to win!  Come on Chick!!!!  Bowled.  McMorran finishes with 8-54 and the match is tied – and they would have to do it all again next week!

I always like to try and finish with something a bit strange or unusual.  So here it is!  There was no first XI match in our first league season of 1974 but the 2s were away at Langley Manor in New Forest One and they would return with a belting 84 run success.  Paul Hoskins’ 44 and 20 from Colin Stuttard took us to 120 all out in our full 40 overs (R Tyrell 5-54 and S Biddlecombe 4-39).  Dave Snellgrove sank the top order with 4-20 and Steve Lock’s incredible figures of 11-6-8-4 dropped the middle order before Keith Bell came on and bowled 7 overs and 7 maidens in his 2-0.  Langley were bowled out for 36 in 34.2 overs – 21 of them being maidens!!

Don’t you just love these stories of vintage cricket!!!