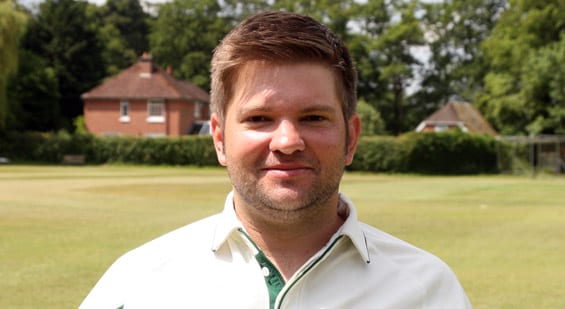 CALMORE ON THIS DAY – July 14th

Welcome to Tuesday.  Should have been Border League night of course with an away game at Trojans but that competition was shelved, I believe for the first time.  I do remember a very wet season where it always seemed to rain on a Tuesday and very few games were played but this is the first time no games have been played at all.  Let’s have a look at the events going back on 14th July.

We will actually start with a real curate’s egg type of day in 2018.  Two superb wins with some exciting performances from young and those more experienced and two defeats to forget – if only the clown writing these articles would let them lay!

In SPCL Division One at Loperwood, we welcomed Andover and we would produce a solid performance to beat them by 41 runs giving us a seventh win from 10 completed games and we were firmly in the shake up at the top of the table.  Can you remember how many league matches we actually won in 2018?  The answer is eight …….!  There wasn’t any major contribution in our 191-8 with Darren Vann’s 31 the top score but James Manning and Mark Lavelle both made 23, Liam Newton 19 and Mike West a vital unbeaten 25 at the end which helped beef the score up as did 44 extras!  Matt Hooper took 5-46 with three men bowled and two stumped, including Callum Stanton!  Andover soon found themselves 43-4 in reply before Josh Ballantine-Dykes (41) and Robin Liney (21) raised their hopes.  As was standard, Lavelle took 4-23 and a couple of wickets each for Mike West (2-33) and Manning (2-21) which held the visitors to 150 all out.  Little did we know then that we would have to wait a while for our next winning beer!

The 2s were in County 3 South and had an away game at Rugby Camp in Portsmouth playing against Kerala, a club named after the large region of southern India.  But it was our own Harbhajan Singh that would decimate the hospitable hosts but it wouldn’t be enough to bring home a victory.  The home side batted first and were bowled for 163 as James Rose would return career best figures, a quite remarkable 8 for 54 in his nine overs.  They made a slow start, opener Joshi hitting 32 off 92 balls but it was the swinging bat of Panamchickal’s 25 ball 34 that lifted them to a chasable target.  Adam Carty made 24, George Woodhall 26 and Paul Henry a rearguard 20 late on but wickets all too readily saw us crash from 52-1 to 86-7 before being bowled out for just 132.  But they did provide the scorers with a ice cream at the drinks break … so they are doing alright with me!

There are days like this from time to time, when nothing really goes right and it certainly didn’t for the 3s down at Lymington 3s in Regional 1 South West.  First of all, we won the toss and put the home side in and they would reach 209-8 in their 40 overs with the captain Mike Cotton taking 3-29 and a couple of wickets each for Jack Stuttard (2-43) and Matt Morgan (2-26).  Our 10 men true tried their best, Tom Sutton top scored with eight and Calum Bailey 6.  We were bowled out – literally with all nine dismissals being bowled – inside 15 overs for 39.  It was just one of those days!

But the 4ths were at the Sports Centre for a home game with Ampfield and North Baddesley 2s and they would produce a stunning performance in chasing down over six an over to win by six wickets with 15 balls to spare.  We used eight bowlers and Keith Woodhall taking 2-22 from eight overs was the pick but the visitors would still post 244-6 in their 40 overs, quite a challenging total.  Three batsmen made 50s in the chase – a superb effort.  Skipper Paul Jewer made 65, Keith Woodhall 73 but the honours went to Josh Ellis who struck 14 fours in a superb 81 that took us home with relative comfort.

The horrendous storms that washed out last week would put paid to the whole programme for a second week in 2012 – although we made sure our trip to Ventnor took place on the Sunday!

We were back in County One in 2007 and welcomed Fawley to Loperwood Park looking for a response after losing for the first time since mid-May in this rain ravaged season.  Solid batting and the bowling honours spread out would bring a 74-run victory.  Clive Surry hit 71 with six fours and four sixes, 37 for Mark Lavelle and Pete Clark’s 36 kept the scoring rate ticking along before Nigel Hill’s robust unbeaten 40 lifted the score to 225-7.  Two wickets each from Hill (2-33), Keith Woodhall (2-26), James Rose (2-30) and Gordon Pritchard (2-16) would roll through the Fawley batting line up for 151 and give us a 74-run success.

Good heavens, two in a row!  We had a rare Time game win in yesterday’s edition and here comes another – it is like the number 12 bus into town from the estate!  This time is was in 2001 when Burridge came to Loperwood and we would record our third win in four which backed up the excellent win over South Wilts the previous weekend.  Hampshire batsman John Francis led the way for the visitors with 61 while David Jackson (28) and Matt Godwin (25*) helped them close their innings after 58 overs at 178-8 as James Hibberd took 4-64 in 18 overs and received solid support from Mark Boston (1-31 in 15).  Paul Draper fell in the first over to regular Calmore nemesis Paul Jenkins as we slipped to 84-5 and 111-6 despite Paul Cass’ 23, Jeremy Goode 24 and Hibberd 25.  But a superb knock from Stuart Bailey, in partnership with Glenn Motchall, would turn things around.  Wicket-keeper Bailey made 51 and the Australian all-rounder an unbeaten 29 to take us to a three wicket win.

This next game features our worst ever start in a SL/SPCL game – and it came in our first ever SL season of 1990.  It was a home game against Havant and having won the toss and chosen to bat first, we would be reduced to 11-5 as Garry Shotton and his opening bowling partner Rod Petersen smashed through the top of our order – we have never been five wickets down for a lower score!  We would eventually reach 142 all out thanks to Stuart Bailey’s 32, Kevin Emery with 35 and Kevin Marshall hitting 25 as Shotton, who took 390 wickets in his top flight career, put 6-20 into his haul.  The result was never really in any doubt once Mike Edwards made 30 and Jon Osborne 57.  Damian Carson’s 42 not out just sealed the deal by six wickets.

We really did need this win in 1979.  With three defeats in a row and four in the previous five, we received AWRE from Farnborough with a little trepidation in County One.  We would be indebted to Peter ‘Tufty’ Taylor, who’s turn it was to dominate the batting with his opening partner Ray Hurst.  Tufty claimed 5-26 and Ray 1-26 as the visitors were shot out for 93, Terry Chilcott adding 2-22 to the honours.  We, like AWRE, lost a wicket without a run on the board when Billy Sims was removed but Bob Wilcocks (26) and especially Paul Hoskins (54) led the way to a crucial win.

The 2s were at Michelmersh and Timsbury in South West Two and somehow managed to lose by 16 runs.  Steve Brandes bowled unchanged for 20.4 overs and took 4-56 and Roy Matthews claimed 3-25 as they home side were bowled out for 163.  Stan Piper made 50 and Tony Archer 45 which took us comfortably to 123-1, needing just 41 more to win with nine wickets in hand.  Those nine wickets added 24 as Dowling took 6-28 to remove us for 147.

Today’s closer is another shot at silverware.  With wins over Bisterne, Ringwood and Langley Manor in the previous rounds, we made the Final of the Sydney Wyatt Knock-Out in 1972 at Bolton’s Bench in Lyndhurst and were up against Rydal.  Tufty Taylor took 3-21 and there was a wicket apiece for Terry Chilcott (1-11) and Roy Matthews (1-16) as they reached just 69-7 in their 18 overs.  Jimmy Gill made 29 and Ben Lyon 17 which took us comfortably to 49-2.  But Brian Pardey had other ideas for us and his 4 over spell, taking 2-7 including Gill and Ron Merritt in his final over would leave us one run short of victory, so it was just runners-up medals for us this time around.