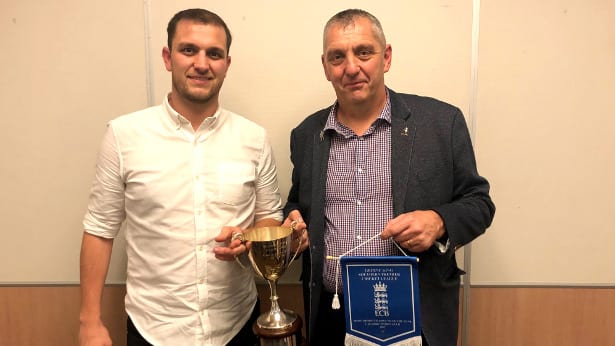 It has been no secret that the improvements at Loperwood Park have met with universal approval by both players and officials across the Southern Premier League and the Hampshire Cricket League in 2019.

But this monumental upturn was ratified at the SPCL Annual Awards Dinner and Presentation Evening at the Southampton Novotel when Calmore Sports were awarded the “Paul Thompson Memorial Trophy” for the Most Improved Ground of the Year.

Chairman Pete Lavelle received the trophy from former England, Lancashire and Durham batsman Graeme Fowler at the event and was thrilled to do so on behalf of the club.

“We had no idea that we had won,” he said. “But we are delighted that we have.

“The work that our groundsman Joe Weston and his small band of helpers, including Stu Bailey and Mike Austin, have put into making our ground look and play as good as it has is nothing short of outstanding and we thank them for their efforts.

“Our ground has received some fantastic feedback from players and umpires this season and the marks have shown that. We have gone from bottom of the whole SPCL to receiving Most Improved and into the top 10 in 12 months!

“Joe has been brilliant since he has come in. He was recommended to us by Ian Tulk in conjunction with our President Steve Brandes, and he has transformed the place into something that we can be hugely proud of – and are!

“This award is testimony to that and we are delighted to receive it.”