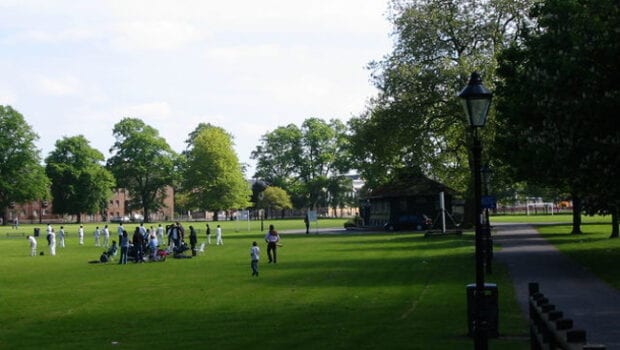 CALMORE ON THIS DAY – June 24th

Welcome to Wednesday, the mid point of another week in this strangest of all years.  Even during the War years, they played some cricket – there was a full programme of Lancashire League and Liverpool Combination matches throughout those years and a handful of games played at Lord’s amongst others.  But here in 2020, there is nothing and Mr. Johnson’s statement yesterday didn’t fill with great joy that we won’t be bowling the ‘natural vector of disease’ anytime soon.  Time to continue our look back and today is the 24th June and with it being a Wednesday – it’s 2017 to start with.

Match number eight was a home game with Rowledge at Loperwood Park and they were comfortably swept aside by 8 wickets.  Choosing to bat first, the visitors could get no momentum into their innings once Liam Newton had cracked open the top order with 3-19 in his seven over spell and economical spells from Daniel Croft and Mike West did their part – their 20 overs only yielding 56 runs which didn’t let Rowledge any drive.  Then the spinners got into the action with Mark Lavelle (3-10 in 10 overs) and Jack Rutter (3-21) rolled the visitors for 120 in 47.2 overs.  Although we lost openers Michael Cook and Ben Perry with only 38 on the board, a free flowing stand of 83 from Ben Johns (38*) and James Manning (46*) coasted us to victory with more than 18 overs to spare.  The “Are We Safe Yet?” campaign continues to surprise many – nearly half way through the season and already seven wins in the bank.

A day trip to the seaside awaited the 2s as they headed to Bournemouth-based Suttoners in County 3 South and an all-round solid display from Tom Perry’s side lifted a 26-run victory away from the hosts.  A strong batting display from the Calmore top order took us to an imposing 240-7 in our 45 overs with a half-century for Allan Hurst (51), 47 from George Woodhall, 35 for Matt Taylor and 25 from the captain leading the way before a crunching unbeaten 31 in 14 balls by Mitch Parker raised the bar.  The home side were never really in the chase once Harri Williams took 4-40 and Paul Henry 2-44 despite wicket-keeper Ward smashing 84 not out in 82 balls closing the overall margin of victory.

The last time that a Calmore side met Wellow and Plaitford 1st XI in Saturday league action was in 1999 in the Southern League.  18 years later, our two clubs would meet once again … in Regional 2 South-West against our 3rds.  Wellow would win the game by 6 wickets despite Jack Stuttard’s 23 which helped us to 115 all out and Sam Vidler’s 3-39 did reduce the hosts to 60-4 but it wasn’t to be.

Regular readers will know that while Wednesday’s feature the highs of 2017, they also feature the lows of 2006.  And Jamie Winters’ side were on the crest of a slump when they were hammered at Hambledon by 165 runs, which came fresh off the 123 run loss to Paultons seven days previously.  The home side batted first and put on 166 for the opening wicket as James Scutt smashed 103 and Dan Hewitt 72 which put us firmly on the back foot.  Skipper Matt Hoggett added 33 to the hefty total of 289-6 with Pete Clark taking 2-68 and Mark Boston a steady 2-58 amongst the carnage.  Things weren’t good at 47-5 and we were knocked over for just 124 courtesy of Malcolm Hobson’s 6-29 although Clark did make 31 and Boston 29.

It wasn’t a lot better for the 2s at home to Kingsclere in County 3 in a very high scoring contest, losing the game by 49 runs which wasn’t a bad effort considering the visitors had racked up 287-5 with Patel making 82 and Gundry 103.  Bailey mauled 44* in 19 balls as all of the bowlers, bar young Matt Gurd, took a mauling.  Paul Henry took 1-62, Steve Dunn went for 38 in four overs and Luke Johnson 2-35 in five but … sorry about this … Darren Challis took the brunt of the pain with 2-106 in his full 12 allocation.  An impressive 86 from Gavin Hopgood did at least give us a platform which Challis (39) and Dunn (46*) took on but it was just that bridge too far and we closed at 238-9.

You always knew the ‘time game’ joy expressed yesterday would be short lived.  And so it was with this 2000 clash in SPCL Division One against Bournemouth.  We won the toss and put the visitors in and after Allan Hurst had removed Kidner and Cassell cheaply, Hampshire batsman Matthew Swarbrick was joined by Michael Stonier and they proceeded to put together 158 as the Bournemouth skipper went on to reach 114 and Stonier 74.  James Lucy did grab 5-73 in his 20 overs which put a bit of a halt on the scoring but they closed their innings at 256-7.  Losing Paul Draper in the first over to Toby Sharpe was a major blow and although Rob Budd (35) and Mark Boston (31) stepped up, our 74-1 became 133 all out against Sharpe (3-38), Joe Wilson (3-27) and James Hands (4-14) doing all the harm.

It is often forgotten that our season in the Southern League in 1995 was another very good one and we collected our fifth win in six with a crushing home win over Petersfield.  Once again, it was the spinners that caused the most damage after Graeme Lyon’s impressive opening spell of 9-4-12-2 allowed John Shepherd (2-40) and Kevin Marshall, who rolled 14 overs for 5-22 which removed the visitors for 115.  Skipper Rob Budd made 26 of the opening stand of 31 with Paul Draper before he was the only wicket to fall which just allowed Martin Kellaway in and his unbeaten 47, along with Draper’s 35 took us to victory in only 23.2 overs.

It was equally as comfortable for the 3s in their home game with Burley in another game where Nigel Hill had a good day out again!  Tony O’Connor tore through the top order with 4-43 as the visitors were bowled out for 87 in 34.2 overs as Trevor Hooker claimed 2-8 but it was Nigel’s remarkable figures of 4.2-4-0-3 closed their knock.  Jimmy Gill’s 48 not out led the chase and Nigel’s unbeaten 21 kept him company as they ran out 7 wicket winners.

Another season of great joy was the 1989 County One campaign under the inspirational Steve Brandes (cheque in the post, Mr President? thanks!!).  But this victory at Sparsholt was a close one and could have gone either way.  A third wicket stand of 103 from opener Gary Stinson (63) and keeper Stuart Bailey (47) was what was needed and it was improved by Tom Pegler’s swift 33-ball unbeaten 57 which lifted the total to 236-8.  The home side were held up early by Cliff Estall’s 1-37 and 11 overs from Dominic Newman which only went for 26.  William Gunyon with 45 and a hard-hitting 65 off 37 balls from May pushed Sparsholt close as they took a liking to Brandes (1-74) and Chris Garrett, who took three wickets but went for 66 but the task was just too much and they fell eight runs shy.

This 1978 County One season is a really fascinating one.  In the first three games of the season, we batted second and won two.  But, since the start of June, Terry Chilcott’s men batted first and went on a superb run of results.  Was 1978 the first instance of the Calmore ‘bat and squeeze’?  This fourth match in the month brought exactly the same result as its predecessors – a comfortable runs victory, this time down at Fareham.  It was a good batting display that set this win up – in fact, it was the only time in our 1st XI history that nine batsmen scored double figures in an innings.  Terry led the way with 32, Billy Sims 23, Michael Newman 24 and everyone else chipped in on the way to 183-8.  When Tufty reduced them to 1-2 and 20-4, the writing was on the wall.  Taylor took 3-33, Ben Lyon 3-25 and Chilcott 3-19 – all of which were caught and bowled, the only time in our 1st XI history it has happened – as the hosts were removed for 145.

Hold on, what’s this?  It’s the Romsey Advertiser Knock-Out in 1975 down at the King George V Ground and a second round encounter with Ashby.  Ashby were something of an ‘All Star XI’ who floated around the Parks League and various other local competitions with the cream of the local cricketing talent and they would knock us out of this competition … thanks to one of our own!  Ashby batted first and made 103-7 from their 16 eight-ball overs with John Harris making 42 and Trevor Hooker 37 at the top of the order but Terry Chilcott’s 5-29 made sure they didn’t push on from their opening of 67.  Jimmy Gill’s 20 was the only score of note against the bowling of Bennett (3-20) and …. Ray Hurst!  Yes, our own Ray Hurst!  He knocked over Michael Newman and skipper Roy Matthews and then ending the innings when Reg Oliver nicked behind to complete figures of 3-16 and bowl us out for 71.  Boo you, Ray!!!!

We will finish today with more from the Parks and the first round of the Hector Young Knockout in 1981.  Our opponents were, as you would almost expect, a work based team – Freightcare.  It has all slotted into place – Freightcare became CFL (Care Freight Logistics) who, in turn, become the team that we used to play in the New Forest League, Camelot!  Anyway, they were called Freightcare back then and this game at Hoglands Park was a comfortable 78 run victory.  Billy Sims (62) and Bob Wilcocks (33) put on 101 for the first wicket as we stormed to 145-7 in our 22 over allocation.  The Dockers crashed to 36-8 against a sustained attack from Ray Hurst (2-33) and Tufty Taylor who ripped out 6-16, including four caught behind by Chick Chandler.  They climbed to 67-8 in the end and we would book our place in round 2 – two nights later against Charendon.

The days of playing cricket pretty much every day …… there was a Romsey Advertiser Knockout game inbetween too!  Border League on the Tuesday night, Hector Young on Wednesday and Friday, Romsey Advertiser on Thursday and back to league action on a Saturday and friendly on a Sunday.  Those were the days!!!!