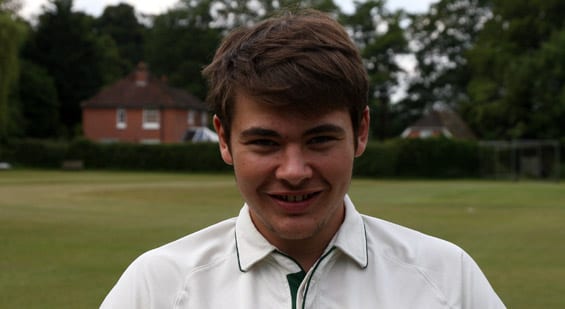 The First XI were hit by an affliction in their match against Hartley Wintney but don’t worry – it’s not catching!!!

With a host of players unavailable, there were six changes from the team of the previous week including a first XI debut for Tom Pattison. With Matt Taylor and Michael Donovan joining Ben Johns back in the starting XI, we had four of our Under 17 Cup winners stepping out in the Southern Electric Premier League clash.

The home side won the toss and chose to bat first and they had 40 runs on the board before Matt Maiden (10-3-31-2) got a well deserved breakthrough. He followed this up with the wicket of the hard-hitting Jack Hersh in the same over and the feeling in the cap was that we just needed to break the next partnership and we had a chance to run through the middle order.

What transpired was some aggressive hitting – which not only destroyed some bowling analysis but also the tail-light of a parked car and the champagne glasses at the 50th Birthday party taking place next to the ground! Mike West got a breakthrough but in a most un-Calmore-like display, several chances were spurned with dropped catches.

This was to be the story of the innings as the number of missed chances grew into double figures as Hartley Wintney’s South African Ari Karvelas brought up a century off just 40 balls and continued on to make 148, taking his side over 300. The only bright moment from the second half of the innings was the performance of young Pattison who finished with three wickets from his six overs.

With 305 to chase, the Calmore reply didn’t get off to a great start with new opener Michael Donovan back in the hutch with only 8 runs on the board. As they have often this season, Mark Lavelle and Ben Johns steadied the ship before the latter was out to a smart catch in the covers. Some small partnerships followed but when Dan Croft was bowled, we had sunk to 8/115 (that’s 115-8 to our English viewers!!!) and thoughts were of getting the mini-bus loaded for the drive home.

Matt Taylor had other ideas and, alongside Tom Pattison, managed to hang on at the other end, adding another 35 runs to the total. When Matt Maiden joined Taylor, the big question was – could he get to 50 with Maido as his partner? Not only did he get to 50 but, with his partner looking surprisingly comfortable at the other end, Taylor began to flourish playing an array of positive strokes including two pull shots for 6!!!

Tensions raised on the boundary as not only Taylor closed in on a century but Maiden also overtook the scores of the more ‘celebrated’ batsmen in the team. Taylor, though, didn’t seem to be feeling the pressure and comfortably dispatched a boundary to bring up a most memorable century. Perhaps realising his chances of bringing up his own personal milestone were slipping, Maiden was finally bowled for 23 to bring to an end a 76-run stand for the last wicket

Never has the old cliche been more evident when saying “catches win matches” but despite leaving without the win required to keep the realistic promotion chances alive, the performance of our young brigade provided lots to be positive about.

Special thanks must go to Pete Lavelle, who not only stepped in to take over the scoring duties for the day but also piloted the mini-bus up and down the M3.