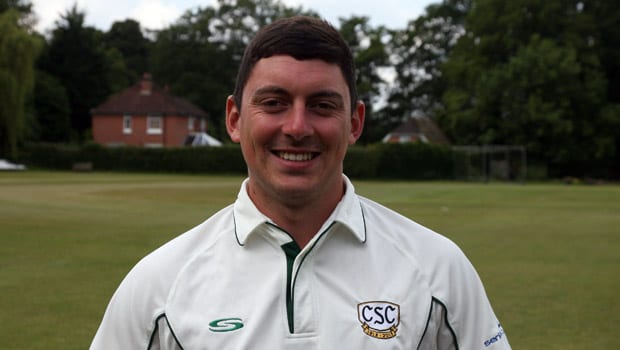 After last week’s poor defeat in their SEPCL Division 1 opener against New Milton, the first XI had the chance to put it right on Saturday at Loperwood Park against a Bournemouth side who also lost heavily in their first league fixture.

With rain throughout the week and on the morning of the game, everything pointed to it being a ‘bowl first’ day.  However, Bournemouth captain Martin Miller won the toss and elected to bat first.

It was the Proudley and Wright partnership with the ball again, and a very similar story to the previous week.  Some masterful bowling from the pair in tandem had the visitors on the back foot from the offset with Proudley (8-2-23-1) picking up the Bournemouth opener leg before and Wright clean bowling the other – with both batsmen failing to trouble the scorers.  The trend continued with Wright, in particular, bowling superbly and not giving the batsmen anything loose.  Wright then dismissed Finnie, the Bournemouth overseas player, for just 2, having him bowled which left the Dorset side reeling at 15/3.

The pressure of not being able to score quickly soon told as a mix-up between the batsmen saw Badenhorst run out for 17 after great work from Ben Johns.  Wright finished his spell with figures of 10-5-17-2 – ten of those runs coming off consecutive deliveries!

Skipper Lavelle then introduced himself and Michael West into the attack and the pair picked up where Proudley and Wright had left off.  Dot ball pressure and nothing easy, backed up superbly by the fielders, soon told again after Lavelle (1/25 off 10) had worked Hurley over before finally finding the outside edge which keeper Darren Vann happily took with ease to further reduce Bournemouth to 50/5 – although Michael Kitson at the other end was looking set and pushing the run-rate up.

A change after drinks brought pace man Luke Johnson (1/10 off 5 overs) into the attack and he got the all important wicket of Kitson (28) straight away – caught well by Johns at mid-off.  West continued at the other end, back to his usual best and giving nothing away, he eventually got the breakthrough he deserved leaving the visitors 70/7.

Bournemouth were then able to build a partnership through the veteran Miller and Woodward, pushing the score onto 108 before James Rose (1/35 off 7) dismissed the latter caught and bowled for 21.  Skipper Miller continued to play a sensible captain innings and finished unbeaten on 29 with his side closing on 150/9 – West (2/31 off 10) picking up the 9th wicket in the last over of the innings.

After a perfect, as always, Calmore Sports tea, the boys set about the run chase, with the aim of learning from last week’s mistakes and taking responsibility, knowing that if we bat for the full 50 overs, we would win the game.  Unlike the start last week, Lavelle and Vann got off to a flyer aided by some wayward bowling in an innings where wides and extras were our top scorer.  The two Calmore openers had negotiated the new ball well and at 32 off eight overs had put Calmore firmly in control; although, a poor shot from the captain saw him inside edge onto his stumps for 14.

Vann and Johns continued to push the score on with Vann in particular striking the ball well over the top of the infield.  However, with the score on 59, Johns and then Vann both fell to the spin of New Zealander Finnie and Singh, on a pitch that was now turning a fair bit, the case was never going to be easy.

However, the seasoned veteran Tommy Pegler and recent recruit Callum Holloway (2) steadied the ship before the latter found the faintest of edges and was given out off the bowling of Singh.  Ben Perry then joined Pegler at the crease, a situation made for the calm, patient head of Perry who very rarely gives a chance.  The pair began to slowly build a partnership and, with the 100 mark in sight, Pegler played his only loose shot of what was a good innings for the team and was bowled for 19.

Perry continued the same way and joined by Proudley (4), the pair edged Calmore closer and closer to the total before the latter was bowled, throwing the game wide open again at 112/6.  West and Perry managed to get the hosts to within 20 runs of victory when West (11) miscued a shot over the top and was caught – 131/7 and squeaky bum time!  Thankfully Perry (21 not out) continued to be calmness personified and with James Rose’s wealth of experience at the other end, the pair got us home with 17 balls to spare, winning by 3 wickets.  With Rose (17 not out) blasting three boundaries in six balls, the game was won in some style!

A fantastic win and great character from the whole team to bounce back after last week’s defeat.  It was sure great to be able to do our first ‘roar’ of the season and have something to build on going into next week’s game as we travel to North Hampshire to face Hook and Newnham. 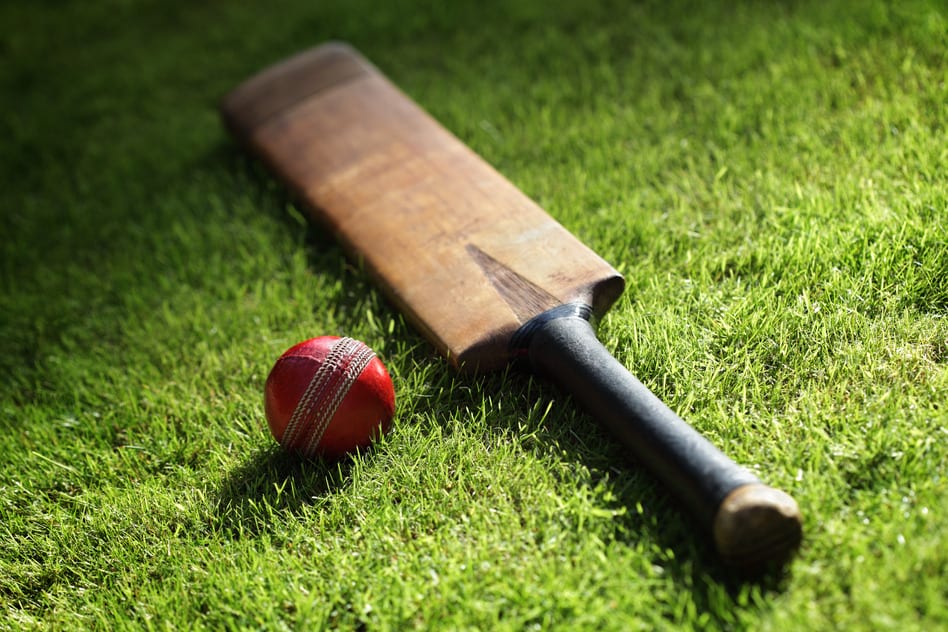 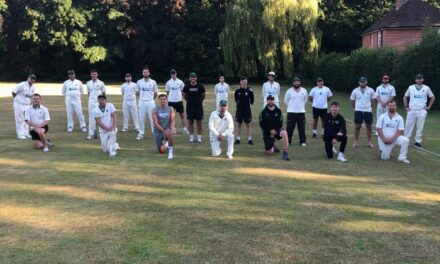 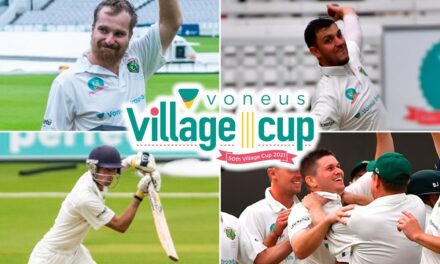 Calmore four named in ‘Team of the Year’